Wexford has a wealth of activities to suit everyone. Our ideal location beside the N11 and N25 means that there is a vast array of amenities right on your doorstep.

Wexford town is located just 5 kilometres away, while Enniscorthy and Rosslare Strand are less than 20 minutes drive.

Our private grounds offer you the choice to either relax in or around our estate or you can visit some of the following attractions: 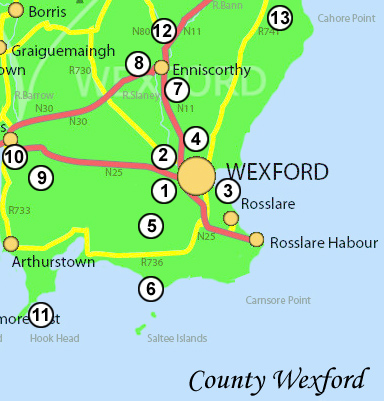 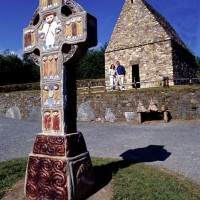 3. Wexford Opera House & Wexford Arts Centre
Wexford Opera House is Ireland’s first custom-built, multi-purpose opera house. The stunning landmark building is nestled in the heart of the beautiful Harbour town of Wexford and offers two diverse performance spaces, The John and Aileen O’Reilly Theatre and the Jerome Hynes Theatre. Each autumn it becomes the focus of cultural tourism in the south east during the Opera festival.
Wexford Arts Centre is situated in a historic 18th Century building in the centre of Wexford town.  A year round inspiring programme of events include film, theatre, dance, lively music, family events, comedy and visual art exhibitions including the Cáca Milis Cabaret. The centre hosts all year round free admission to all our art exhibitions and talks.

4. Wexford Wildfowl Reserve
Wexford Harbour and its Slobs are natural havens for birds. Located on the south-east coast of Ireland, they are the closest point for birds migrating into or out of Ireland from Britain and the Continent from a southerly direction.
From early October through to the middle of April, the North and South Slobs and the Harbour are home to thousands of ducks, geese, swans and waders making this a site of major international importance for wildfowl and waders. 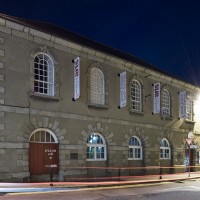 5. Johnstown Castle and Irish Agricultural Museum
The harmony between great Victorian revival castles and their surrounding ornamental grounds is rarely seen to such perfection as at Johnstown Castle. The whole site is a jewel in the crown of Wexford Tourism. The mature woodlands and lakes of this demesne provide the perfect setting for this turreted, battlemented and machicolated castle of gleaming silver-grey ashlar, built for the Grogan Morgan family between 1810 and 1855 and incorporating part of a more ancient castle.
The Irish Agricultural Museum is a premier cultural institution within the South East. It showcases country life and displays a vast array of artefacts relating to a bygone era including carts, ploughs, country dressers and sugan chairs.

6. Kilmore Quay and the Saltee Islands
Kilmore Quay is a beautiful small fishing village 20km from Wexford town noted for it’s white washed thatched cottages and relaxed and friendly atmosphere.
A favourite with anglers, wildlife lovers and families, fishing boats ferry day trippers out to the Saltees Islands from the quay. The Islands were once a magnet for pirates and smugglers but are now home to hundreds of gannets, puffins and seals! Kilmore is famous for producing some of the best and freshest seafood in the country.

7. National 1798 Visitor Centre and Vinegar Hill
The Centre tells the epic and heroic tale of the 1798 Rebellion and its aftermath using the latest multi-media and interactive exhibits. A spectacular audio-visual presentation places the story in an international context and state-of-the-art exhibition techniques are used to give visitors a glimpse of our fascinating journey to modern democracy.
Vinegar Hill has an iconic view of Enniscorthy and was the location during the Rebellion of 1798 where Irish insurgents, led by Father Murphy, encamped on Vinegar hill and flew their banner from the windmill. The shell of the windmill remains today. 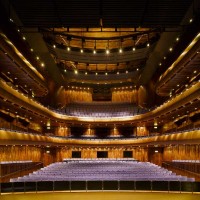 8. Enniscorthy Castle
Recently renovated and refurbished, Enniscorthy Castle explores the development of the castle and town from its earliest 12th Century Anglo-Norman origins, through the 16th century, with recreations of the rooms of Mr. Henry J. Roche and his family who lived there from 1903 to 1951. The exhibitions also explore the 1916 Rising in Enniscorthy and the work of Irish furniture designer and architect Eileen Gray born in 1878 just outside Enniscorthy.

9. JFK Park & Arboretum
Dedicated to the memory of John Fitzgerald Kennedy, President of the United States from 1960 to 1963, the Arboretum is a plant collection of international standing.
It covers 252 hectares (623 acres) on the southern slopes and summit of Slievecoiltia.  It contains 4,500 types of trees and shrubs from all temperate regions of the world, planted in botanical sequence.  There are 200 forest plots grouped by continent.
Special features include an Ericaceous Garden, (with 500 different rhododendrons, and many varieties of azaleas and heathers), dwarf conifers, hedges, ground covers and climbing plants. The lake is the most popular part of the Arboretum, and is a haven for waterfowl.

10. Dunbrody Famine Ship & Irish Emigration Experience
The Dunbrody was a 19th Century three-masted sailing ship that brought many emigrants from Ireland to North America during and after the Great Famine. An exact replica of this 176ft long 19th century ship was constructed and completed in 2001. Today she rests at the New Ross quay, beside a fascinating state-of-the -art visitor centre which is a key focus for tourism in the area. 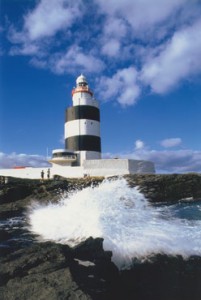 11. Loftus Hall & The Hook Lighthouse and Peninsula
The haunting beauty of the Hook Peninsula provides the backdrop for Loftus Hall. It is reputed to be the most haunted house in Ireland but the only way you’ll find out is to come and visit Loftus Hall. Loftus Hall for the most part has been untouched since it was abandoned. Our tour guides will direct you through the ground floor of the house on an hour long interactive tour and recount the grim and gruesome history behind Loftus Hall, including it’s notorious visitor!
The Visitor Centre at Hook Lighthouse is at the tip of the Hook Peninsula, Lonely Planet describes it as one of the top 14 attractions in Ireland. The centre offers guided tours of the lighthouse tower, one of the oldest operational lighthouses in the world.
The lighthouse is a 13th Century Norman structure, built by the Earl of Pembroke as part of the development of his Lordship of Leinster, culminating with the spectacular view from the balcony. Relax by the sea and keep an eye out for seals, dolphins and even whales! In clear weather, you can see for miles, and in a storm the spray often reaches the top of the lighthouse!

12. Ferns Castle and Village
Ferns Castle was built in the 13th century, possibly by William, Earl Marshall. Originally, the castle formed a square, with large corner towers. Now, only half of the castle now remains. The most complete tower contains a fine circular chapel, with carved ornaments. The tower also has several original fireplaces and a vaulted basement. Archaeological excavations revealed a rock-cut ditch outside the castle walls.
This beautiful medieval village was once the capital of the powerful Kings of Leinster and the remnants of those days dominate today’s village landscape.

13. Wells House
Waiting to be explored is Wells House & Gardens, a great Victorian House and Gardens in the heart of Wexford. Wells House has something special for all generations to enjoy and share including beautiful landscaped gardens, tree-lined walks, craft courtyard and tearooms.